Brexit and UK import trade, what do we know and we should await

That’s it, after almost a year of postponements and endless debates in the house of commons, the street, and the pubs, the UL is officially outside the European Union. It joined it 47 years ago and after the 2016 referendum, it seemed inevitable that this significant event would materialise eventually.

So far, the planes are still landing and taking off from Heathrow, the Dover -Calais route is still busy, as a gentle reminder to the current foreign secretary and the supermarket shelves are full of Spanish oranges and Dutch tomatoes. So, someone would ask, why all the fuss?

Now that the UK has formally left the European Union, it immediately enters an 11-month transition period.

During the transition, the UK will continue to obey EU rules and pay money to the EU. Most things will stay the same but there will be some changes.

Ok, so first certainty: until 31 December 2020, nothing will change for trade, the UK is still part of the customs union, goods are not checked at the border and the rules for products are still the same. But 11-month is a relatively short period and we should ask also

what would happen on the first of January 2021?

The answer is, we still don’t know and we will not get the info until a lot of negotiations between the UK and their counterparts, will happen. It is also likely that this transition period will be extended to allow for all agreements to take place.

But let us at least speculate: we focus on the trade that is the UK bound and that comes from the European Union.

Firstly, 30% of what the UK buys comes from other countries,

UK imports from the EU were £357 billion (52.7% of all UK imports i.e. £680 Billion). So taken as a bloc, the EU is the UK largest exporter. The US is the largest exporter country representing 10% of goods imported by the UK.

These figures include products and services.

The UK generally has a trade deficit with European countries, the biggest of these is with Germany (-£32 Billion) 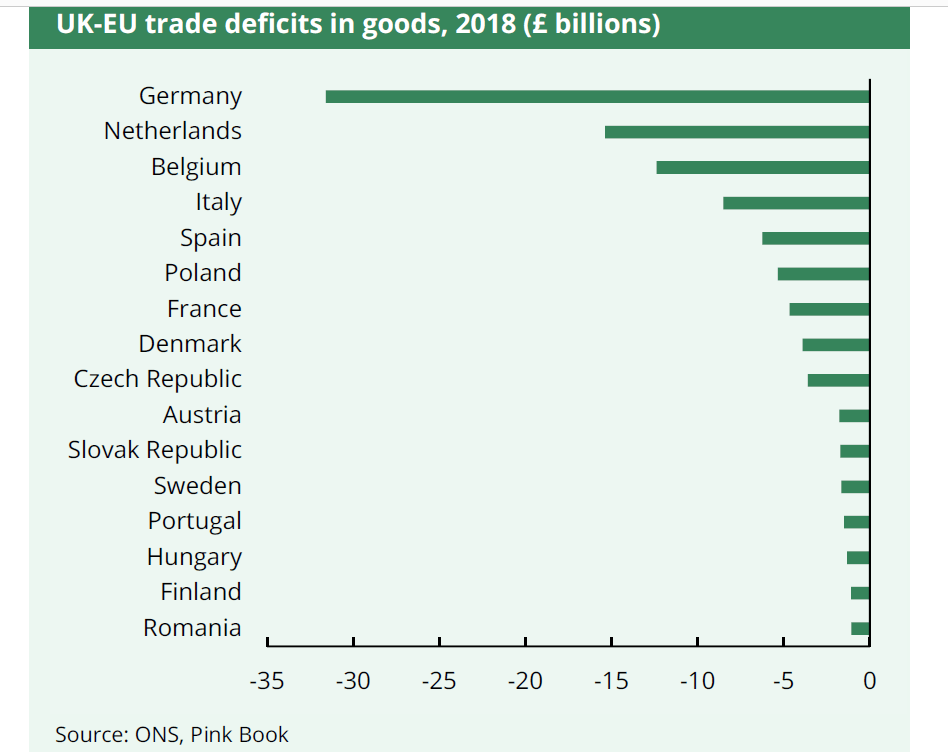 The UK top imports from the EU are mainly road vehicles, pharmaceuticals, and machinery: 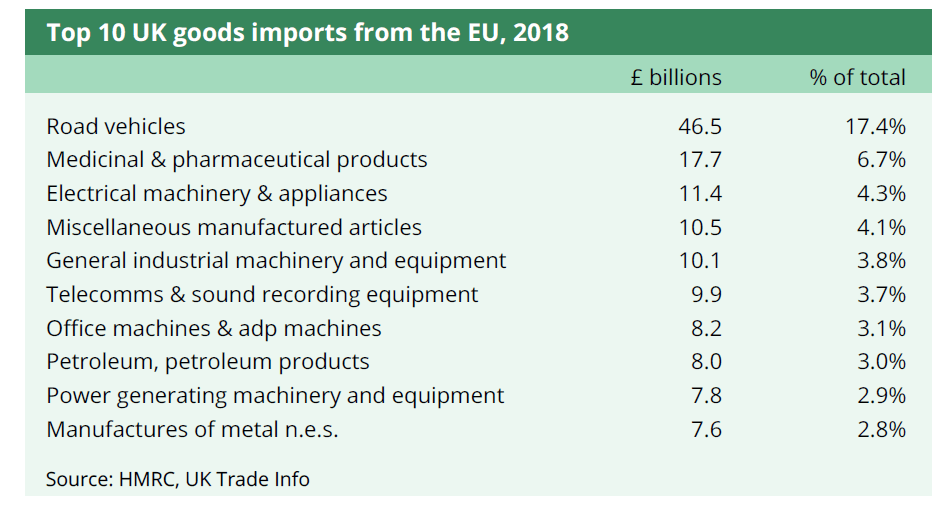 How about the UK Food Imports?

The Uk imports half of the food it consumes, and the trend is continuing as the UK self-sufficiency has been declining for the last 30 years. 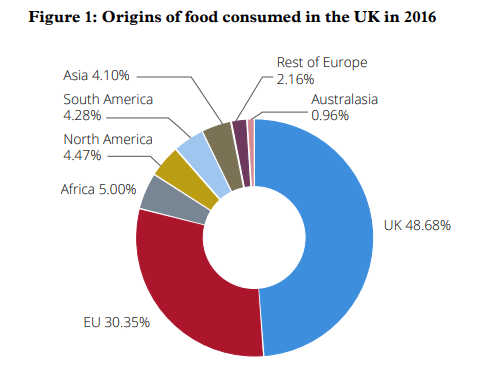 So, Brexit will not only impact the food imported from the EU but also the 20% or so coming outside the EU. The reason is that these are currently under trade agreements between the EU as a whole and the individual countries. The UK needs new trade agreements to substitute the ones it had a member of the EU.

In total the UK imports as much food as cars £46 Billion) and this is the breakdown: 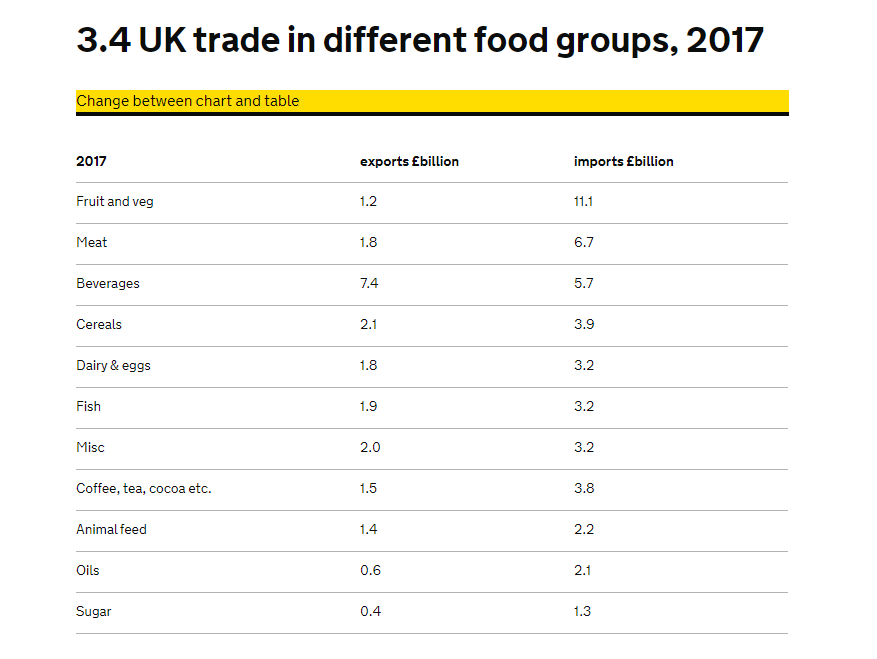 If an agreement cannot be negotiated, Brexit is likely to result in an average tariff on food imports of 22%. While this would not equate to a 22% increase in food prices for consumers, there can be no doubt that prices paid at the checkout would rise.

To counteract this the Government could cut tariffs on all food imports, EU and non-EU, but this would pose a serious risk of undermining UK food producers who could not compete on price.

Of course, tariffs change is not the only changing and unknown factor, others are:

All these will be clarified little by little during the year or post-2021, Prowexx will give you the right guidance whether you are a supplier willing to enter the UK or already there but trying to understand the impact on your business.

Prowexx will also help UK buyers source products within the new paradigm of prices, quality, and regulation. It is imperative that for such buyers, they have access to the broader producer base and the best way to do that is to go online as otherwise, time is running out.

This website uses cookies to improve your experience while you navigate through the website. Out of these cookies, the cookies that are categorized as necessary are stored on your browser as they are essential for the working of basic functionalities of the website. We also use third-party cookies that help us analyze and understand how you use this website. These cookies will be stored in your browser only with your consent. You also have the option to opt-out of these cookies. But opting out of some of these cookies may have an effect on your browsing experience.
Necessary Always Enabled
Necessary cookies are absolutely essential for the website to function properly. This category only includes cookies that ensures basic functionalities and security features of the website. These cookies do not store any personal information.
Non-necessary
Any cookies that may not be particularly necessary for the website to function and is used specifically to collect user personal data via analytics, ads, other embedded contents are termed as non-necessary cookies. It is mandatory to procure user consent prior to running these cookies on your website.
SAVE & ACCEPT